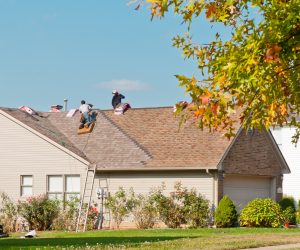 The Truth About Roofs : if you’ve got roofs, then it’s a matter of time. Read Bruce’s pragmatic advice for finding the source of roof leaks quickly and efficiently

You can’t have too many roofs in your inventory without dealing with leaks. If you rehab, you EXPECT to find ceiling stains, the tell tale sign of a leaky roof, in almost every project. I find projects without signs of past or present leaks the exception to the norm!

There is no getting around it, says fonction matlab . Curled shingles and numerous leaks are a pretty good indication that it would be cheaper to replace the roof rather than repair it. Just factor that into the repairs and accept it. It’s one thing you won’t have to worry about if you are keeping the property, and it ups the value whether you keep it or sell it on the retail market after the rehab.

If the shingles still have some life on them, but there is some leakage to repair, finding the real source of the problem can take multiple tries. It can get pretty aggravating as you sometimes try and fail to fix a leaky roof. Naturally, you want to try to fix this without calling out an expensive professional roofer. Sometimes you can, sometimes you can’t. Here are some tips for diagnosing roof leaks.

– I find that in the course of a rehab, it’s always “good” to have an extended period of heavy rains.

That way, any and all leaks become evident. If you have a property that is not occupied, or that is not being actively rehabbed after a period of extended rains, go visit and check for signs of leaks. If you can stop by while it’s still raining, that’s the number one, best time to investigate leaks from inside the attic.

– Get a mini flashlight that goes into a small belt holster and make that part of your normal clothing.

You will use it all the time…for more than looking in attics! It’s great for plumbing, under cabinets, etc. Make it part of the “uniform.”

– The garden hose – a rehabber’s friend.

In a recent project of mine, the roof was relatively new yet I had a ceiling stain in the kitchen. We’d thought it was all taken care of in two tries, so we patched the ceiling, applied stain block, and textured over the spot. Then came the rains, and the circular and symmetrical spot was back! I’d had just about enough so I climbed onto the roof, garden hose in hand, and stationed my handyman in the attic. In less than a minute of hosing down the roof, we found the very tiny hole that was the culprit. A dab of tar below and above the shingle and viola! Problem solved. The tiny hole was causing water to drip directly onto the ceiling drywall, hence the circular stain.

The pattern can offer you hints. When you come across a circular ceiling stain, there’s a good chance the leak is dripping directly onto the ceiling drywall from above. Put a nail in the center of the stain and get into the attic and look directly above the nail and you might just find the problem. If you do this in bright daylight, a spec of light might be visible, which would make the repair a little easier. Even if you find a hole, I still recommend the garden hose trick to see if there are other problems to fix.

If the stain is small and circular, it usually means the amount of water is small…lucky you. If the stain region is larger, it may still be an easy fix especially if it is a single hole. If there is enough rain making onto the ceiling drywall, it will pool and soak in. This will make it look like a massive leak when it might be a one-shingle repair (plus some new ceiling drywall). The garden hose trick will quickly tell you if the problem is a single hole, or your roof is like Swiss cheese.

Stains that appear along a line may indicate that water is draining along a rafter or truss. Inspect that rafter starting from the top looking for signs of water. The source may be a single hole that is sending water down the rafter making multiple stains show up in a line.

– Isolating the leak. Be aware of the ridgeline.

When you are inspecting a property, be aware of the direction the roof ridgeline runs as you inspect the interior. If you come across a ceiling stain toward the middle of the house near where the ridgeline is above you, the source of the water is easier to isolate. Water doesn’t flow up! So, the suspect area extends from roughly the stain area, up to the ridgeline. In many cases, that’s a lot less roof to investigate.

On the other hand when stains are out near the roof edges, they are the trickiest to diagnose. Why? The source of the water could be from higher in the roof than where the stain is. The water could be getting under a shingle near the peak, draining down between the shingles and ply, and finally leaking at the point you are seeing the stain. It’s just hard to tell upon initial inspection. Get into the roof and check out the rafters around that area for signs of water stains? If you’re lucky you’ll see light and a hole. If you’re not that lucky, it’s time to get on the roof and see what you can find. If you don’t find anything obvious, it’s time to call a roofer…that is, unless you decide to replace the whole roof.

– Valleys are often the culprit when it comes to leaky roofs.

I especially find this in property that has been neglected or vacant for long periods of time. Very often the problem is caused because leaves have accumulated in the valley. These leaves hold moisture which rots the shingles and underlying ply over time. Depending on the extent of the rot, the repair can range from replacing ply and shingles to cleaning off the leaves and letting it dry. Be aware of your roof valleys and keep them clear!